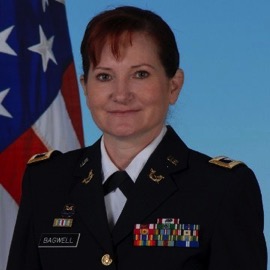 Colonel Jane Ellen Bagwell-Paschall is currently Chief of International and Operational Law in the Office of the Judge Advocate General, in which capacity she supports the Unified Combatant Commands (COCOMs) across the globe. Most recently, her work has focused on the Army’s Regionally Aligned Forces (RAF) concept, helping Army troops support the COCOMs to understand local conditions and cultural context in the regions in which they work. Under this concept, RAFs will provide consistent support to specific COCOMs, so as to meet the COCOMs’ needs within their respective regions. Cultivating reliable partners in the regions by improving governance and rule of law is a key component of the RAF concept, and Colonel Bagwell-Paschall has worked to find ways for Army judge advocates to engage with their counterparts in the regions for this purpose.

As of September 30, Colonel Bagwell-Paschall will be retiring from the U.S. Army. She will join USAID in October as a Foreign Service Attorney in the Office of the General Counsel.

Colonel Bagwell-Paschall’s experience in the U.S. Army ranges from the local to the regional and global levels. Before serving as Chief of International and Operational Law in the Office of the Judge Advocate General, Colonel Bagwell-Paschall was with the United States Africa Command (AFRICOM), where she was in charge of legal engagement with foreign counterparts in the region. She also previously served as a representative of the Office of the Judge Advocate General to the Detainee Task Force following the Abu Ghraib scandal and supervised U.S. support to the Central Criminal Court of Iraq. She has worked closely with local-level counterparts, such as judges in Iraq and military attorneys in Liberia, as well as senior officers, including the senior military attorneys of a range of countries.

Over the course of her career, Colonel Bagwell-Paschall has come to see firsthand how important it is that rule of law practitioners engage with militaries. Earlier in her career, she focused primarily on improving rule of law in the civilian sector when the military had to step in and fulfill roles normally undertaken by civilian authorities. To this end, for example, she helped train judges in Iraq as the country was recovering from the 2003 conflict. In a context like this, improving accountability and ethical standards within the military was not a key or consistent focus of her work. Her viewpoint changed during her time at AFRICOM, however, after working in situations in which foreign militaries were using local civilian populations for their own benefit. She now emphasizes that, when militaries do not adhere to a strong code of ethics or are not held accountable, they can undermine rule of law efforts that focus only on the civilian sector. During her time at AFRICOM, she played an instrumental role in piloting AFRICOM’s Rule of Law Pillars, an effort to define “rule of law” in a military context. “Militaries are often the most powerful actors in many countries,” she says, and “militaries have an incredible capability to turn stability upside down when they want.”

Colonel Bagwell-Paschall recognizes that strengthening rule of law within foreign militaries not only contributes to stability in their respective countries, but also contributes to military-to-military relations. “These people are future partners,” she says, “so the more they follow rule of law, they more likely they will succeed as U.S. military partners.” Where militaries are particularly powerful actors in developing countries, she views them as ideal entry points for rule of law practitioners working in those countries.

She also recognizes the importance of a coordinated interagency approach to rule of law work. In her experience supporting the COCOMs, she has seen how the military, civilian agencies of the U.S. Government, and even nongovernmental organizations (NGOs) interact in the field. According to Colonel Bagwell-Paschall, “In the interagency, we need to be more connected and have more communication, particularly when deployed. When everyone is siloed with their own agenda, we end up working at cross purposes and duplicating efforts.” She adds, “NGOs are out there doing similar work, but we often don’t even know they’re there.”